HAWKE is a 501 (3) not for profit organization licensed by the State of Florida Fish and Wildlife Conservation Commission and the Federal US Fish and Wildlife Service to rehabilitate injured and orphaned wild birds, mammals, and reptiles including endangered species. They also have special permits to possess permanent wildlife for educational programs. These birds and animals can not be released back to the wild.

Melanie Cain-Stage and her ”traveling talons” program with hawks, owls and falcons (plus flying squirrel and turtles) have been presenting programs since 1980. She goes to local schools and or organizations and teaches people about the habits and information about Florida wildlife and how they can help preserve the environment. 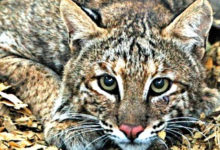 To save valuable time, Melanie called George Letts of the St Johns County Sheriffs office. He lived near the location and had drugs that may be needed to capture the animal. Officer Letts had brought eagles and other wildlife to HAWKE in the past, He even had experience rescuing bears. He got the dazed cat into a large kennel pictured here above Melanie had her intensive room ready for the injured cat and was released when he came with the bobcat secure in the Kennel.

The bobcat was in serious condition, his eyes were darting uncontrollable from side to side and his entire head wobbled and was tilted at an unnatural angle. He could not focus or dilate his eyes and this indicated that he had severe head trauma. There was no acknowledgment with a growl or response to our presence, Melanie made the animal comfortable and put some cortisone for brain swelling in a piece of meat. She then put the injured cat in HAWKE’s ICU room in where it was warm and quiet. By this time it was past midnight. Melanie was afraid he might have internal injuries, or bleeding in the brain and not might make it until daylight. In the morning, “Braveheart “named for after the celtic warrior, was more alert, but still shaking his head and eyes. She called St Johns Vet Clinic who have donated their medical care to HAWKE for over 15 years. Expert wildlife veterinarian Dr Kathleen Deckard explained because of the head trauma it was unsafe to drug the bobcat and have him x-rayed. Only supportive care and proper medication and food would be his treatment.

Melanie prepared her largest mammal cage by placing a dog igloo house inside where braveheart could hide and sleep. She used the empty shallow swimming pool for cat litter and put wood shavings over the floor for his comfort, The empty pool worked perfect for a super size litter box. A large bowl of fresh water and food and the kennel was opened and the cat dashed in and went into his igloo. This cage is located in a back area of the fenced in HAWKE compound under a huge oak tree. The roofed cage has 4 foot steel lined wire to prevent escape and also give total privacy away from people and other wildlife.

Melanie was really concerned for the first few days that Braveheart was going to die. He just laid n the igloo and slept. He did however eat his food (fresh beef heart and chicken) which was laced with his medications. By the third day he was peeking out of the igloo and looked much improved, The St Augustine Record newspaper featured this beautiful; photo taken by Daron Dean and article by Tiffany Pakkal on their valentines day front cover story The photographer had a long range lenses so the Bobcat was not aware of his picture being taken. With every day there was improvement. He was eating his food and also a special canned food made for bobcats and had been wormed for parasites. He had no broken bones and his bruised body and head injury gradually healed. Melanie did not want to drug or stress him out for capture. So two weeks before she planned to release him she had placed in the cage a large bobcat size live trap. It was tied open so the cat could walk in get his food and the door would not shut.

HAWKE is a volunteer organization and can not pick up animals that are outside their general district. If you just want information on wildlife, such as habits, bird feeders, places to go birding etc, go to google search and type in the animal or bird you want information on.