This injured Peregrine falcon arrived several days before the big holiday. Melanie was planning on going with her husband Sam, to the Stage Cousins family Thanksgiving in Gainesville. The Falcon’s delicate condition made this impossible, so she stayed home to give intensive care to this patient. The falcon need antibiotics twice a day and small amounts of food every few hours to keep its strength up. It was kept in an incubator and covered with towels to keep her comfortable. 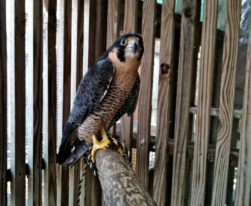 The story of its arrival to HAWKE:
Melanie received a call from the Marine Science Center on Ponce Inlet Tuesday before thanksgiving. This Volusia County funded wildlife Center cares mainly for sea birds and marine life such as sea turtles. The Falcon had the broken leg and injured wing after colliding with a guide wire from an electric pole. A kind woman said it fell from the sky into her back yard and she took it to the Ponce Inlet Facility. These falcons can reach speeds of 250 MPH so it was very lucky to survive the impact. This raptor “peregrinis flaco anatum,” generally appears in this area in mid-November as it makes its way to points south to Brazil.

The Marine Center called Audubon Birds of Prey Center in Maitland to see if they would take the falcon. Audubon said give Melanie at HAWKE a call, she is experienced with Peregrines, has great Veterinarian support teams, and has a permit to kept this bird who because of its extensive injuries , could never be release.

George Letts with the St Johns Co. Sherriff Department met a volunteer from MSC who drove it to St Johns County. Officer Letts took it immediately to St Johns Vet on US I in St. Augustine. These Veterinarians and staff have been volunteering their time and facilities to help injured wildlife for over 20 years. Dr. Kathleen Deckard stabilized the wing and leg, and Sam Stage picked the falcon up after work , and brought it home to Melanie. Early Friday morning the falcon was booked for Major surgery at St Johns Vet. Friday morning Melanie dropped off the falcon and Dr. Mark Gendzier assisted by Vet Tec Linda , spent hours working on the the broken leg . In the photos above you can see the external brace Continued inside back page

Melanie names the young falcon Kenya after two close HAWKE supporters who have passed away Ken Moffitt, and Ken Pacetti. This is an immature bird so we do not know if its a boy or girl, just that it is an impressive and intelligent raptor.