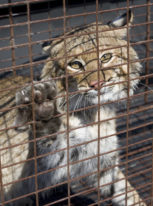 Melanie Cain-Stage, president and curator of HAWKE, has been a licensed wildlife rehabilitation and environmental educator since 1979. Over the years she has cared for many bobcats, including Brave Heart, who had a severe head injury after being hit by a car. With the help of St. Johns Vet and the excellent care of HAWKE, he was successfully released back into the wild. HAWKE rarely gets orphaned baby bobcats, but that is all changing…more adults and babies are likely because of increased traffic and over development of rural areas, combined with the closing of several wildlife centers that that once could have taken in this native cat. There are very few people in Florida “set up” with special cages and experienced with rearing and training a bobcat that will be able to survive in the wild.

“MAC MITCHELL/My St. Johns Sun – Braveheart the bobcat waits restlessly before being released into the wild on March 25 in St. Johns County. He was taken in by H.A.W.K.E., a county animal rescue group, on Feb. 10 after being hit by a car on Florida 207 just north of Hastings. After a month and a half of medical treatment, Braveheart made a full recovery, and was ready to be released back into the wild.”

In April, there was a request from a center in south Florida who had a small bobcat kitten that had been orphaned. The baby was found at a construction site. Her mother had been killed by a bulldozer and the den destroyed along with any siblings she might have had. The center that received her was only permitted for birds. They took excellent care of her, but were not experienced with bobcats or mammals. The bobcat had been handled and bottle-fed since just two weeks old. After seeing the request, Melanie emailed the center and was told they were desperate for help because no one in all of Florida had offered to help. By this time the cat had totally bonded with people and was weaned.

Melanie told the center that if they could drive the cat to HAWKE she would raise it. This was the third bobcat she had received in two years. She prepared a large shoreline inside cage that she furnished with a kitty litter box, a nest box to hide in. and cat-safe toys to play with. When the kitten arrived, Melanie noticed that she was mewing, purring and looking for companionship. She had no fear of people. Melanie tried at first to reverse the bond by not letting anyone else see or handle the cat, but it was hopeless…she only related to people.

There is a hunting season on bobcats. People can get permits to catch them by snared trap and kill them for their fur. Bobcats are naturally shy and learn from their mother to avoid people, and a tame bobcat would not last long in the wild. People would be terrified if an adult bobcat approached them, especially during the day. It would be a death sentence. It was too late to change this cat’s bonding to humans. Thankfully, she is a female, and she would be able to be a foster mother to baby bobcats so HAWKE could help other centers who have just one baby. Our bobcat here will be a foster mom for youngsters all over Florida and be able to bond with the babies, so they can be released back to the wild where they belong.

Melanie named the baby bobcat Cherokee after her dear friend the late David Thundershield Queen who was always fighting for the environment and was very proud to be part Cherokee Indian. Cherokee was excited but a little scared when moved to her large outside cage. She soon became familiar with logs to claw, a nest box, a walkway all around the inside of the cage and a grand view of all that goes on in the center. Melanie plays with her every day with string and catnip toys, and she runs like a lightning bolt and get lots of exercise. Cherokee is fed a well-balanced but expensive diet of canned Zupreme wild feline formula food and dead chicks and mice, so she gets all her dietary requirements. A generous supporter has donated funds to double the size of her cage, and the Boy Scouts are helping with this and other projects for Eagle Scout Awards.

Cherokee has tripled in size and become an amazing agile and breathtaking beautiful bobcat, long and lean. To see films, photos and more about Cherokee, visit hawkewildlife.org. For updates and help pay for her care, check our Facebook page.

A second bobcat arrived in October 2012. It was a miracle of timing that she was even discovered. Melanie was traveling down S.R. 207 at 9:20 a.m. on a Thursday morning on her way to a physical therapy appointment, when she noticed an animal up against the aluminum fence on the opposite side of the four-lane highway. This fence is extremely, long and the spacing between rails very narrow. There was a car stopped nearby and a man was heading for what she assumed from a distance was a dog. But Melanie’s instincts said turn around and check it out, so she did. When she looked again she could tell it was a bobcat. It was scared of the approaching man and was starting to somehow squeeze itself through the bars of the fence, causing it to become stuck. Cats can articulate their body to get through small spaces though. The man drove off and by the time Melanie parked her car, the bobcat had successfully popped through the fence! Melanie was relieved but felt it would be a good idea to check it out anyway. When she looked down the seven-foot drop on the other side of the fence, a huge adult bobcat was on its side looking up at her. She could see its hip and leg were injured, probably from being hit by a car early in the morning, and it was just resting by the fence.

Melanie’s adrenaline shot through her body. She called for back-up and received assistance from George Letts, the agricultural agent of the St. Johns County Sheriffs Office, who only the week before had rescued a deer for HAWKE. He rushed over to carefully rescue the injured animal. He climbed over the fenced and jumped down quickly, then he got the bobcat carefully into a kennel. Melanie had already called ahead to St. Johns Vet Clinic to tell them that they would be bringing it in.

St Johns Vet does all the medical services for us. Without their help we would not be able to have the high success rate or be able to help wildlife that needs x-rays and surgical care. They dropped everything and Dr Burkhalter and Dr Wihbey quickly sedated the animal for painless physical examination and x-rays. She was named Georgia in honor of George. When the doctors along with Melanie and George examined the x-rays, it was bad news. Her hip socket was completely crushed and her leg bone displaced totally out of the socket. The pelvis was crushed and there was no way to repair the damage caused by a car or truck hitting her at a high rate of speed. Melanie and George were deeply saddened that Georgia was not able to be saved, but she was quietly euthanized and put out of the intense pain she had endured for many hours.

You might ask why was this cat lucky? If Melanie had not been on her way to the doctors and spotted the cat a minute or two difference she would have just been left to slowly die in the grass where no one would have seen her. She was of good weight and could have lasted a week just in agony and dying of thirst while cars sped by overhead. This too is a part of wildlife rehabilitation that many wildlife rehabilitators just cannot handle. Some wildlife because of injuries have to be euthanized. Others may not make it, even after every effort has been made. It can break your heart, but to help you just have to do the best you can.

This stunning creature is a reminder of how many creatures, from turtles to endangered panthers, get killed each day by traffic and how many more may be suffering on the side of the road. If you want these creatures to get medical care, please support what HAWKE does and thank the wonderful doctors and staff of St. Johns Vet who donate their time and resources to provide medical care to help HAWKE and wildlife. And please, especially from dusk to dawn, look out for wildlife that may be crossing the road…slow down!