From The Florida Times Union link to original article

ELKTON | A welcoming chorus of cheerful chirps and purring-like chuckles greeted Melanie Cain-Stage when the makeshift family of river otters, Andy, Charlie, Opie and Patty, heard her coming toward their habitat at Humane Association of Wildlife Care and Education Inc. 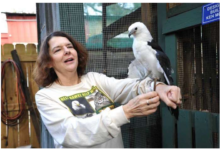 Dances with Clouds, an elegant swallow-tailed kite, cocked her head and hopped along her perch nearby to watch Cain-Stage, who paused to say “Hello”‘ before continuing on to check Cherokee, a young bobcat brought to HAWKE too tame to survive if returned to the wild.

HAWKE is one of the oldest nonprofit wildlife rehabilitation facilities in Florida. But its future is uncertain, as is the fate of similar sanctuaries statewide that care for the state’s injured, sick or orphaned native animals and birds.

Recent patients include a young screech owl that a county sheriff’s deputy brought in early Christmas morning after it was found lying injured beside a road. On Dec. 20 county firefighters turned over another screech owl that apparently also had been hit by a vehicle, but it didn’t survive. However, the Christmas owl is recovering and soon should be ready for release, Cain-Stage said last week.

Like some of its patients, HAWKE is struggling to survive. The economy is taking its toll on fundraisers. And what some rehabbers perceive as apathy toward their work is making their mission to preserve a natural resource tougher each day.

HAWKE recently had to dip into its emergency fund to feed the animals. Cain-Stage said she “maxed out her credit card” so the facility could accept new patients. There is no large reliable source of funding such as corporate sponsorship.

“We need some money that we can depend on because … we just can’t keep going day-to-day praying we have enough money,” she said.

It costs about $3,000 to raise a baby otter to the point where it can be released into the wild. Food alone for a screech owl costs $5 a day. This year, $20,000 was needed for fencing to keep otter and bobcat habitats separate to ensure compliance with state regulations, she said.

Other facilities also are scrambling financially.

Florida has one of the largest networks of wildlife-rehabilitation facilities in the nation. Although licensed and regulated by state and federal authorities, the rehabbers don’t get any government funding, said Beth Hirschfeld, president of the Florida Wildlife Rehabilitators Association.

The Florida Fish and Wildlife Conservation Commission does work with rehabbers to ensure they are operating properly in the best interest of the animals and humans, said Katie Purcell, spokeswoman for the commission’s Division of Law Enforcement.

But the number of rehabbers is dwindling. Cain-Stage estimates about 40 percent of Florida’s larger facilities have closed in recent years. Others are switching to solely educational programs, Hirschfeld said.

“Mostly, there are small rehabilitators throughout the state taking care of a large number of animals in their homes and in a very small area, using resources out of pocket just because that is kind of the nature of the beast,” said Hirschfeld, a wildlife veterinarian for 14 years. Some work two or three jobs out of necessity so they can afford to care for the animals. A lot are “running on fumes and hoping for the best.”

“A lot of people get beaten down, and don’t feel appreciated and don’t feel like they financially can keep doing it,” Hirschfield said. “These days, we’re also losing rehabilitators because they die, get sick or old and fade away.”

After 29 years, Wrede’s Wildlife Rehabilitation Center Inc. in Sebring stopped taking in animals and became an education-only center Jan. 1. That means there will be no Highlands County facility that takes care of birds. The center’s Facebook announcement attributed the decision to “less volunteers, less donations and funding … plus some health issues” for its operators and a volunteer.

Cain-Stage and other rehabbers said they want people to understand the importance of Florida’s wildlife, and to care enough to support their efforts to preserve it.

“It’s sad, but true. If you want to help the poor owl hit by a car, the eagle shot and left to die, the bobcat kitten starved and alone, you need to support wildlife rehabilitation,” Cain-Stage said.

That may be a hard sell. Three of 17 people picked randomly by the Times-Union in St. Johns County said a portion of state hunting and fishing license fees should go toward wildlife rehabilitation. However, the other 14 said no government money should be used because the facilities are privately run and rehabbers do it voluntarily.

Cain-Stage established HAWKE in 1987. Respected by her peers, Cain-Stage is considered a river otter expert, having taken care of about 50 of the animals and successfully released many during her career. She also is known for her experience with bobcats and birds of prey.

HAWKE’s patients are returned to the wild if possible. But if unreleaseable, they may become part of HAWKE’s environmental education program or find homes at other facilities. HAWKE’s four otters serve as a foster family for orphaned baby otters brought to the facility. Cain-Stage hopes Cherokee will become a foster parent to orphaned bobcat kittens.

To raise public awareness about wildlife rescue and rehabilitation, HAWKE does education programs at local schools and civic organizations.

Meanwhile, the state association of wildlife rehabilitators is trying to interest young people in the field.

“It’s kind of difficult when we say, ‘You know, you’ll get the warm fuzzies and feel really great about what you do, but you’ll live in poverty and not make any money,’ ” Hirschfield said. “It’s not an easy sell.”